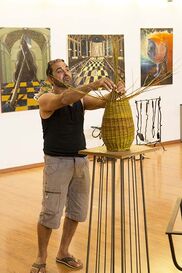 Dušan Barkóci comes from the village of Brodské, works on the railway. In his free time he enjoys basketry. In the photo, he works on the creation of a wicker jug for dry flowers. Basketry has a tradition of more than 120 years in the family. However, it was not a craft that would serve as the main source of funding, but as an additional job.
The photo was taken during the European Roma Blacksmith Symposium in 2014.

Robert Rigó is the artistic smith from Dunajska Luzna. From his smithy and The Hefaiston Salesroom the manually forged objects. From a small candelabra through large balustrade to dominant gates; these all can be found throughout Slovakia as well as in many countries in the world.
Robert Rigó focuses on traditional craft trying to preserve the ancient smithery motives and technique.
Robert Rigó is the chairperson of the Chartikano Association which in 2015 realized the 15th European Romani Smiths Symposium. In their Gallery of Smithery the rich creation of the master smiths from Dunajska Luzna is presented.
Formerly, Dunajska Luzna was called the Iron Village. Smithery as a craft has more than 300 years long tradition there; until today being the place with the highest number of forges in Slovakia.

Štefan Rác comes from the village of Bolešov, from a family with six children. His father was a mason, his mother was a housewife. He himself has five sons. As a little boy, he used to come to a blacksmith's workshop, to a local railway blacksmith. In the village of Bohatá, he learned the craft of blacksmithing - farriery. After school he started working in the Kliment Jefremovič Vorošilov Plant in Dubnica nad Váhom. From the farriery he worked his way into a large machine forging. After military service, he returned to the factory, where he worked as a blacksmith for making tools for the entire company. He worked in the plant until his retirement. He worked in Libya for three years as a blacksmithing teacher.
The photographs were taken during the documentation of the blacksmith craft at the European Roma Blacksmiths Symposium in Dunajská Lužná.

A selection of photographs portraying the Romani she-smith Barbora Rácová. The photos were taken during the blacksmith symposium in 2014 in the village of Dunajská Lužná. The pictures show her with her grandfather Štefan Rác.
She studied at an art school, specializing in the glass processing - stained glass. She is engaged in artistic blacksmithing, combining metal and glass. She comes from the smithing Rác family, from the village Bolešov. 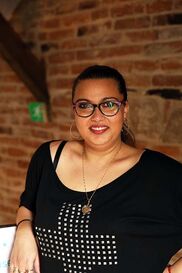 Singer and actress Pavlína Matiová was born in Roudnice nad Labem into a musical family. She graduated from a secondary pedagogical school and is a graduate of the conservatory in the field of singing. She is a member of the theater group of the civic association Ara Art, she has been a guest at the Theater in Vinohrady, the Hybernia Theater, and the Karlín Music Theater. She has also worked in musical projects. She is the first Roma woman to sing as a soloist in Prague's Rudolfinum.

The play entitled "Čirikloro or What a Bird Says" is dedicated to the memory of the founder of Czech Romani, Mrs. Milena Hübschmannova. It’s a music fairy-tale which presents the Romani cultural tradition, literature and wisdom of old Roma; opens the questions about what is the real truth, and what is possible to believe in.
Directed by: David Tišer
Dramaturgy: Líza Zima Urbanová
Musical arrangement: Tibor Žida
Produced by: Veronika Jíru, Ara Art, z.s.

Žaneta Štipáková graduated from the Department of Music and Dramatic Art at the Secondary Art School in Košice, where she received her upper secondary education. She worked as a voice pedagogue at the Private Conservatory in Prague, as well as an assistant teacher at a primary school in Košice.
She is currently a member of the Romathan Theater Ensemble where she is acting, singing, also directing and writing her own dramas.

Selection of photographs from the presentation of a folklore ensemble for the purpose of documenting the field of Romani music.
The folklore ensemble Romano Jilo was founded in 2008, the leader of the ensemble is Peter Kačica. The ensemble was created with the aim of supporting and developing the talent of Romani children and youth. They perform at festivals in Slovakia, but also abroad.

On November 15, 2019, the State Scientific Library in Prešov held again one of a series of live events on the occasion of the World Roma Language Day. This live book featured the film Ľoľi Paradička (Red Tomato), its authors, the actress in leading role and the music band, which were the authors of music in the film. The selection of photos is from this event. It includes: the director and screenwriter Richard Staviarsky, the producer Mária Staviarská, The Folk Music Band by Štefan Cína, the actress who played  the main heroine in the film,  Veronka - Kamila Mitrášová.