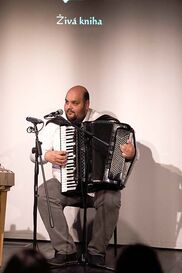 The Folk Music Band of Štefan Cína is a musical ensemble composed of four musicians, founded in 2007. The founder was Štefan Cína Sr. Today the band consists of: Martina Ďuriková Cínová (violin, vocals), Štefan Cína Jr. (accordion, guitar, vocals), Štefan Vansač (dulcimer, vocals) and Peter Pavlík (double bass, vocals). Štefan Cína's folk music repertoire consists of traditional songs from all over Eastern Slovakia, but also Central Slovak and West Slovak songs. The photos were taken on November 15, 2019 at one of a series of events organized by the State Scientific Library in Prešov under the title "Living Books".

Kamila Mitrášová is an actress. She comes from the village Bystré in the district of Vranov nad Topľou. She made her debut in the film made by Viťo Staviarský - Ľoľi paradička, in which she played the character of Veronika Rigová. With this acting role, she became well-known among the  Slovak and Czech film audience. In one of her interviews, she mentions that her mother registered her for an audition for this film. The photos were taken on November 15, 2019 at one of a series of events organized by the State Scientific Library in Prešov under the title "Living Books". 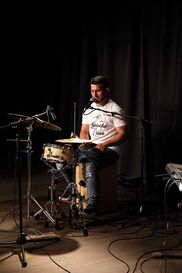 A selection of photographs of the Lomnické čháve band; made during the Living Book event, which took place on 7 August 2020 in Prešov.

The Gypsy Band Lomnica Boys was the first noticed by the public at the Pohoda Festival in 2014, when the documentary film All My Children was presented. The band transformed into its current form only during the shooting of the feature documentary film The Band, in 2017. After a successful performance at the Pohoda Festival in 2017, they decided to perform independently, under the name The Lomnica Boys.

The debut CD album titled This is Us live was released in 2020 and contains 13 songs.

The photos from the monodrama performance of the play Chameleon Girl.

The monodrama produced by The Independent Theater Hungary. Screenplay: Marton Illés, Director: Tomás Szegedi, Acting: Emília Lovas. The story of a Romani girl growing up in a world consisting of her family, school, the wider society. A girl with special abilities can read the thoughts and memories of people around her. She does not want to follow the example of others, rather decides to live life in her way.

The story of the superhero is based on the true stories of Roma youth and the environment from which these youth come. These stories were recorded at workshops of the Independent Theater of Hungary organized under the name "Roma Heroes". The record was created: 28.02.2020, Wave club - center of independent culture, Prešov. 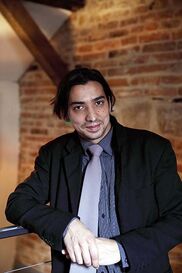 Tamás András Szegedi is an actor, director, theater pedagogue and activist, playing in theaters since 2010. In 2018 he graduated from the Hungarian Theater and Film Academy as a drama instructor. He works as a drama pedagogue in The Independent Theater Hungary, also he is a teacher of disadvantaged children. He directed several chamber theater performances, monodramas and puppet theater performances, with strong social critical message.  He is also a human rights activist, trying to contribute to social equality improvement and empowerment of disadvantaged groups. 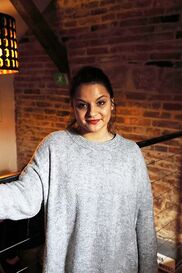 Emilia Lovas is a theater artist, pedagogue and activist. In 2009 she participated at Karavan Art Academy where, after meeting a theater producer Rodrigó Balogh, got the leading role in Feather Picking, the drama played in The Independent Theater Hungary. Later, she graduated from the Pester Hungarian Theater Academy. Since 2015 she acts in various theaters, recently started dubbing and directing. Among her other activities is teaching the disadvantaged children arts, and activism in the field of human rights.

Aneta Duždová is the leading singer of the vocal-instrumental group Sabrosa. The band began in Raslavice, the village in the district of Bardejov with Frantisek Gall as the manager. Originally it consisted of three female singers and instruments players with the repertoir of mainly traditional Romani songs. Later, their repertoir included also modern compositions of popular interprets.

Eva Adamová has worked at the Romathan Theater since 2002. She started as a member of the dancing ensemble of the theater, later she was part of the acting and singing team. In addition to performing in theatrical performances, she also works as an external pedagogue at the Private Music and Drama Conservatory in Košice, where she focuses on the acting and dance training of young actors.

The selection of pictures portraying the soloist of the Romathan Theater, Roman Godla. He plays dramatic roles, both leading and supporting roles in most stage performances for children as well as for adults. Besides acting he works also for dancing section of the theater as its choregrapher. Roman Godla came to Romathan Theater in 1994 immediately after his obligatory military service finished. Untill 2002 worked only as an actor and singer.

A selection of photographs from performances of the Romathan Theater soloist Marián Balog, which was made by the Documentation and Information Center of Roma Culture in the years 2013 to 2018.
He came to the theater in 1992. Since 2009, besides acting, he works as dramaturge and director in the theater. His first experience with theater was received before 1992, during his time in the Theater of Jonas Zaborsky in Presov. Besides theater, he played in films in the past. In 2000 he was casted for one of the main roles in the film (co production of Czech Republic, Slovakia and France) named Report on Pilgrimage of Students Peter and Jacob. In 1995 he was awarded the prize given by The Association of the Theater Artists in Slovakia and the Slovak Literature Fund.
Other awards:
2006 – Literature Fund – awarde for exceptional artistic and directing input in creation of the drama The Cunning Family
2007 – The Award of Kosice City for large participation in founding the Theater Romathan, long lasting artistic work in the theater and talented directing which produced the core repertoir of the theater.
2016 – Literature Fund – the annual award for directing the original Romani music fairy-tale Magical Bell.