Eugen Vizváry is a music producer, a composer, a pianist. He is one of the most requested Slovak musician, who devotes to the music genres of Jazz, Funky, Fusion Rock, Pop, Hip-Hop, R&B, Country, Classic.

The Live Libraries, as a method, offer an opportunity to know the personal stories of interesting people, who are almost unknown to the majority audience. The purpose is to promote the identity of Romani national minority and on the other side to introduce the Romani people as an national minority with a rich cultural tradition. The second of a series "Live Books 2015" organized by State Scientific Library in Prešov, held on 22. June 2015 in Wave Club in Prešov, this time discussing about the Romani music in Slovakia. The main guest was music producer, composer, pianist Eugen Vizváry, one of the most requested Slovak musician, who devotes to the music genres of Jazz, Funky, Fusion Rock, Pop, Hip-Hop, R&B, Country, Classic. The event was accompanied by the Cimbalom folk Ensemble - Ďusi Band from Prešov (Július Bandy Sr., Július Bandy Jr., Peter Ferko, Kristián Bandy + Samko Bandy) and singers Žaneta Štipáková and Vanessa Siváková. 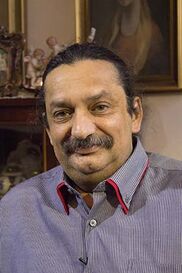 Ján Berky Mrenica junior, one of the members and since 1997 also the head of the Devil´s violin Orchestra, belongs among the prominent violin virtuosos in Slovakia. He studied the violin play on Conservatory Bratislava, but he is also engaged in writing the books about the most famous Romani songs. He utilized his musical talent for composing the musical arrangements for a CD of Devil´s Violin, but also for the other various folk ensembles. He supports musically talented children from socially disadvantaged environment, his effort grew into a well-known project called Divé Maky (Wild Poppies). The photographs documents the interview with Ján Berky Mrenica Jr., where he speaks about the music as a representative of the emotions and the harmony and which address people regardless of nationality or ethnicity.

The European Roma Blacksmith Symposium started to write its history in 2004. The very first symposium was organized by the Civic Association Chartikano, on 16th of October 2004 in a historical part of a village, on a forecourt of a former kindergarten, opposite the St. Martin´s Chappel, who is the patron of a blacksmiths and a carters. The photographs captured ilustratively the course of the 10th year, which took place on 29th of June 2013 in a Local Cultural Centre in Dunajská Lužná. 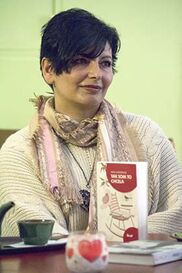 Erika Hornáková was born in Myjava, where she still lives. She apprenticed to a saleswoman, she worked as a sales manager, also as a estate agent. Then she made her dream come true and now she´s working on a little family farm for several years. The writing is a relax for her and a balm on her soul, but the absolute relax for her is the farm, the animals and the nature, which fulfil her with an eternal energy. Her literary beginnings are linked to the novel Ako čokoláda (Like a Chocolate), that was never published. Her debut was a women´s novel Tak som to chcela (I wanted It This Way), in 2013. Then the other three novels were published: Nebezpečne blízko (Dangerous Closeness) (2014), Nikdy nehovor nie (Never Say No) (2014) and Tak sa to stalo (It Happened This way), what is the free continuation of a novel Tak som to chcela (I Wanted It This way). 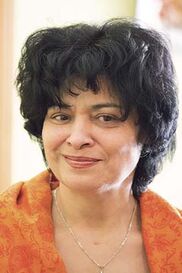 Zdenka Mahajová belongs among the Romani writers, she lives in Myjava, she´ve been working in a school kitchen as a cook for years. She debuted with an autobiographic novel Zatmenie (Eclipse), where the author offers a story of a maturing of Romani woman, based on her personal experiences and real life events. In 2011 she published the collection of poems, called Otázniky (Question Marks). Her poetic works offer readers an opportunity to understand her own path to herself, the journey from the head to the heart. The book contains a CD, where the author recites several poems, accompanied by a music of MAOK.

He was born in Kunová Teplica, in a hungary speaking family. The family has a long tradition of musicianship and smithery. He was led to the fine arts since his childhood. He gratuated from the Faculty of Education on Matej Bel University in Banská Bystrica, studying programme fine arts and Russian language. He passed his postgraduate and rigorous studies on the Faculty of Education on Constantine the Philosopher University in Nitra. He draws with an Indian ink, he paints with an oil paints. He prefers a religious themes, women portraits, and also a landscapes. His works also reflects a life of Romani people. He´s got a rich pedagogic and publishing experiences. He worked as a teacher on elementary schools, high schools and even on the universities. And he also worked for the State Pedagogical Institute in Bratislava. 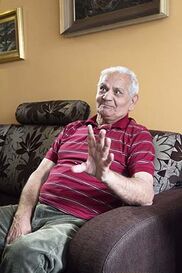 LL.D. Gustáv Karika was born in a large Romani family in Myjava. He was trained to be a machine fitter. In 1950 he became a student on a Collage of political and economic sciences in Prague, supervised by then General Secretaty of the CPC Central Committee Rudolf Slánsky (born 31st June 1901 - executed 3rd December 1952). After his execution, Karika continued his studies on Charles University in Prague, where he graduated from the administrative law. He worked as an officer in charge of a minorities on a Regional National Committee in Košice (since 1954), later he worked as a judge in Poprad and Stará Ľubovňa. In April 1969, together with MD Ján Cibuľa, Anton Facuna and Dr. Alojz Pompa, he was a founder of the Union of Gypsies-Romanies in Slovakia. After the end of the Union (3rd January 1973) he worked as a corporate lawyer in the mechanical enterprises in Nová Dubnica. He was also a lawyer in several other companies and non-governmental Romani organization.

Ondrej Ruszó - the Process of Painting 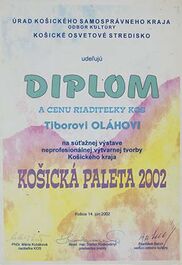 Tibor Oláh is an amateur artist, living and working in Plešivec village. He was born in Detva, as one of 8 siblings. He was brought to fine arts by his brother Dušan Oláh. His favourite theme is nature - landscapes and village settlements. His work is characterized by bold colours. He paints on canvas and also on hardboard. He says he´s painting what he remembers from his childhood. He often records the inspiring nature on video.