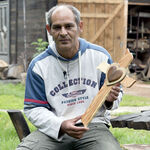 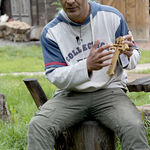 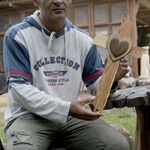 Imrich Goroľ comes from the village of Soľ. He worked as a construction worker. He became a woodcarver just accidentally. He is a member of the gospel band LOND. During one of their rehearsals in the Religious Center in Čičava, he met a woodcarver Milan Krajňák who showed them some drawings, asking whether they would like to come and learn something about the craft of woodcarving.
The photographs were taken in 2013 during the documentation of the ROMA ART Čičava craft workshop. The sheltered workshop was established in 2012, initiated by Martin Mekel.