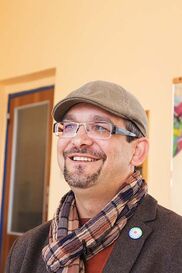 A selection of photographs from performances of the Romathan Theater soloist Marián Balog, which was made by the Documentation and Information Center of Roma Culture in the years 2013 to 2018.
He came to the theater in 1992. Since 2009, besides acting, he works as dramaturge and director in the theater. His first experience with theater was received before 1992, during his time in the Theater of Jonas Zaborsky in Presov. Besides theater, he played in films in the past. In 2000 he was casted for one of the main roles in the film (co production of Czech Republic, Slovakia and France) named Report on Pilgrimage of Students Peter and Jacob. In 1995 he was awarded the prize given by The Association of the Theater Artists in Slovakia and the Slovak Literature Fund.
Other awards:
2006 – Literature Fund – awarde for exceptional artistic and directing input in creation of the drama The Cunning Family
2007 – The Award of Kosice City for large participation in founding the Theater Romathan, long lasting artistic work in the theater and talented directing which produced the core repertoir of the theater.
2016 – Literature Fund – the annual award for directing the original Romani music fairy-tale Magical Bell.