Tibor Oláh - The process of painting

Tibor Oláh is an amateur artist, living and working in Plešivec village. He was born in Detva, as one of 8 siblings. He was brought to fine arts by his brother Dušan Oláh. His favourite theme is nature - landscapes and village settlements. His work is characterized by bold colours. He paints on canvas and also on hardboard. He says he´s painting what he remembers from his childhood. He often records the inspiring nature on video. This digital object catches painting of Roma settlement Pastovník in Detva, where he spent his childhood. The painting was made as an illustration for Romano Nevo Ľil newspapers.

Ondrej Ruszó is an amateur artist, living and working in a Plešivec village. He was born in Revúca. He´s running his own atelier together with artist Tibor Oláh. He´s involved into the fine arts since his childhood since elementary school. There were periods of time, when he didn´t do art at all. He says, that talented person will always have talent, even though he won´t paint for years. While he was working on construction sites in Bratislava, he improved his skills, attending the art course after the work. His first works were published in Romano Nevo Ľil newspapers in the early 90s. He illustrated poems. His prefered themes are religion, he draws portraits and he´s also interested in building architecture.

Tibor Oláh is an amateur artist, living and working in Plešivec village. He was born in Detva as one of 8 siblings. He was brought to fine arts by his brother Dušan Oláh. His favourite theme is nature - landscapes and village settlements. His work is characterized by bold colours. He paints on canvas and also on hardboard. He says he´s painting what he remembers from his childhood. He often records the inspiring nature on video. 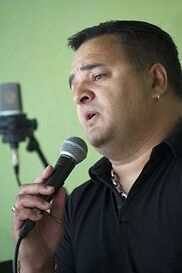 He started to sing at the age of 13. In 1990 he founded music band RIKO, he released his debut album, called Romano jilo, in a music publishing company Akcent. In 1996 he released another album Šunen roma, with Ján Rigo, Imrich Mészaros, Martin Rigo, Daniel Rigo. One year later they released an album Júlia Júlia. Sinse 1997 he is a solo singer.

He had performed with a slovak pop-stars, such as Oldo Hlaváček, Dušan Grúň, Jana Kocianová, Lýdia Volejníčková, Aťa Klímová and many more. In March 2009 he released album called Mulatok mert jól érzem magam (I am having fun, because I feel very well) together with an internationally respected queen of the Romani songs, Bangó Margit, which was awarded the Platinum Record for 15 000 sold CD´s in a June of 2009.

He is also co-organiser of the annual Roma festival in the area of Žitný ostrov, he is a member of civic association Common Way with the Romani Culture and also the co-organizer of a Roma Rose Award. He is a founder of internet radio "Duj".

The photography catches two street musicians in the streets of centre of the city. The interprets are folk Roma singers from the village of Chminianske Jakubovany near Prešov, who perform their music on the streets, sometimes as a musical guests on various events. They sing duets, accompanied by the guitar music.

The orchestra is consitered to be the one of the best orchestras in the world in the cathegory of Etno and World Music and it is very favourably received by the audience home and abroad. The musician started in the Diabolské husle Orchestra (The Devil´s violin), founded by Ján Berky Mrenica Sr., and after it´s end in 2007, the Cigánski diabli Orchestra (the Gypsy Devils) has started. They played concerts on 5 continents and in 35 countries of the world. They performed at the famous stages, such as Berlin Philharmonic, Komische Oper-Berlin, Kozerthaus-Berlin, Royal Opera House-London, Hans Max Saal-München, Smetana Hall-Prague, Konzert und Kongressaal-Luzern, Concert Hall-Melbourne, Goldener Saal-Musikverein-Wien, Is Sanat Hall-Istanbul, Palace of Culture-Novosibirsk, EXPO 2008 Zaragoza, EXPO 2010 Shanghai, Winter Olympic Games-Vancouver 2010, Olypmic Games-London 2012.Awards:2014 - World Master Award - South Korea2008 - Woman of the year award for culture (Silvia Šarköziová)2008 - Golden Disc Award, for an album Dobré časy (The Good Times)

František Godla belongs to the leading representatives of process of ethnic emancipation of Roma people in Slovakia. In 1985 he achieved the academic title PhDr. He worked as a teacher in the first place, but after functioning 26 years on Grammar school of Anton Prídavok in Sabinov, he started to deal with a subject of methodology of education of Roma pupils. In years 1997-2004 he was a director of Grammar school in Sabinov. Later, in years 2004-2011, he worked for Prešov Self-Governing Region, Department of Education. During the years 2005-2010 he was a chairman of Board of Experts for an education of Roma pupils, in Ministry of Education of the Slovak Republic and also he was one of the members of the Team of Advisors of the minister of education, for the field of regional education (2005-2011).

Cimbalom music group "Oračkovci" comes from Holumnica, in Kežmarok county. The members of the group are a family members of a musical family with a rich tradition. Nowadays they play a folk cimbalom music in Vysoké Tatry (High Tatras).

Theatre performance „Birdie Beadie - Chirikloro Mirikloro”, based on Daniela Hivešová-Šilanová´s text, performed by professional Romani Theatre Romathan from Košice. The educational performance, above all adressed for a children, took place in Romathan Theatre in Košice.